The history of marbling

Marbled paper, whatever its origin, has remarkable characteristics: marbling is inimitable because of its uniqueness, it is also unforgeable.
The very first difficulty consists in floating the pigments on a liquid, an essential condition to transfer them then on the paper sheet.

In Japan: Suminagashi developed in the 12th century

Sumi: ink and Nagashi: floating on moving water
Developed in the Echizen region, this technique uses pure water on which the artist floats Chinese ink.
The drops of ink are deposited with the tip of the brush in concentric spots. The patterns are formed by a breath of air, the movement of a fan or the creation of a current. The ink is then transferred to rice paper.

Underneath the surprisingly simple appearance, suminagashi conceals fine complexities. Beyond its decorative and artistic aspect, this technique is also used by Buddhist monks as a meditation technique, to connect gesture and movement with nature.

In Turkey: Ebrû develops since the 15th century and means “art of clouds”.

The abstraction of the ebrû paper favors its adoption by the Islam which makes it the support of predilection of its holy writings.
The colors are natural, mixed with ox gall and deposited on a water bath thickened by a vegetable glue, such as gum tragacanth.

These papers are used for calligraphy as well as for the interior lining of trunks and chests or for the decoration of books and all sorts of small objects.
The difficulty of obtaining a figurative drawing was such that it was necessary to wait until the 1910s before calligraphers managed to marble very realistic floral motifs.

In India : in the 17th century, the combination of several Persian and Indian techniques allowed the realization of complex patterns using several marbling baths, stencils and hiding systems based on plants or mucilaginous 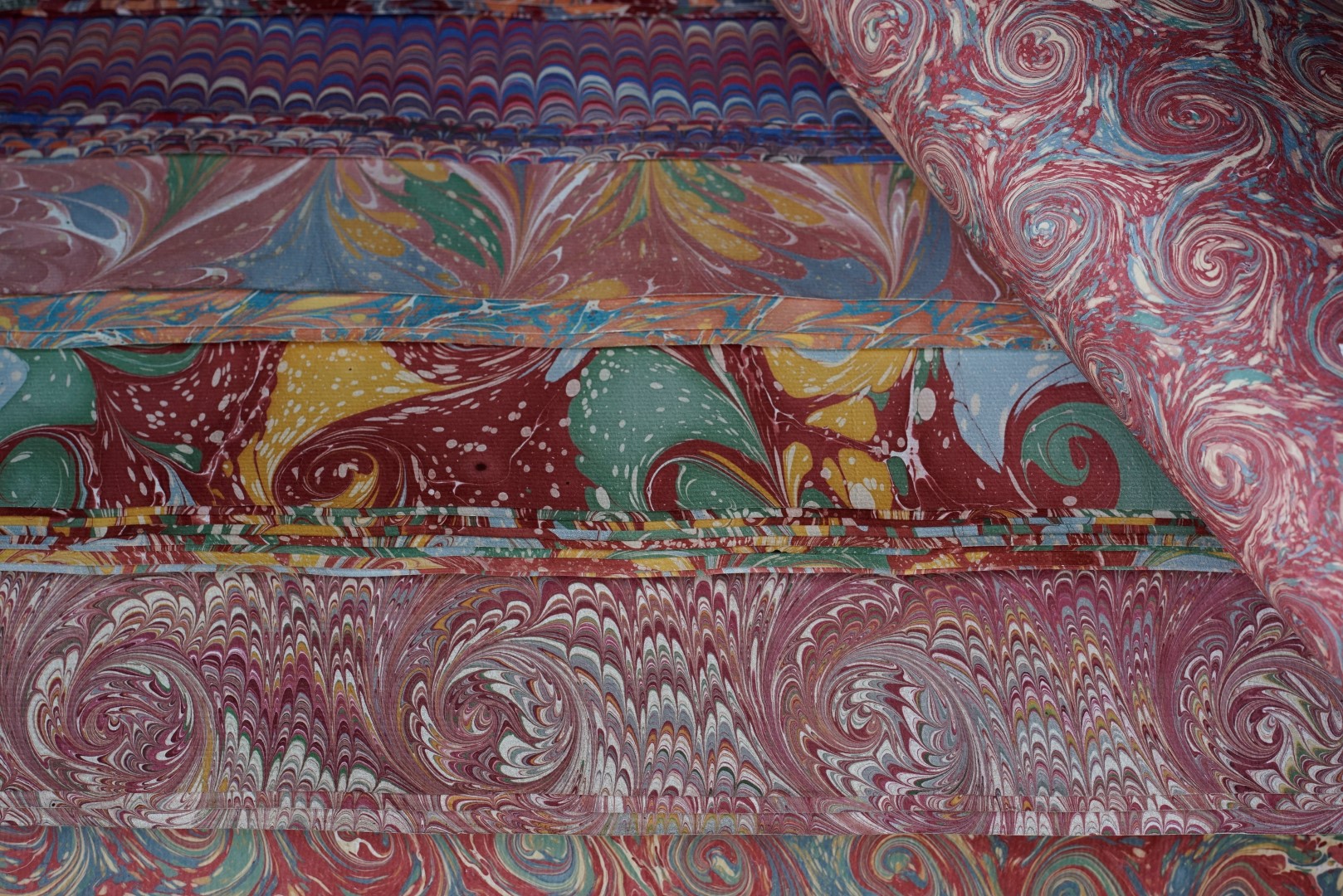 travelers discovered this art with the capture of Constantinople in 1453 and the commercial and cultural exchanges that followed.
The craze for marbled papers – then often referred to as “Turkish papers” – is manifested in the libri amicorum (the books of friends) which appeared in the second third of the 16th century.
-It is in Germany that the first productions appear at the very beginning of the XVIIth century then they are exported to its neighbors to reach a considerable level of production in the XVIIIth century.
-In France, the cartiers and dominotiers compete for this activity before the eighteenth century recognizes and distinguishes the particularities of the activity of marble maker without ever granting them corporations.

The art of bookbinding inaugurated at the end of the XVIth century this use destined to last for several centuries, accompanying the development of the book until its industrialization.
Marbled papers were finally made in France under the reign of Louis XIII. It is to the king’s bookbinder Macé Ruette that is attributed the paternity of the French marbling that is applied on the back cover of the book and then on the flyleaves from 1661 – 1680.
From the beginning of the 17th century, bookbinders began to marble the edges of books.

In the 19th century, the prodigious progress of chemistry broadened the palette of painters and marble makers.  In addition to this, new products were added, the empirical use of which allowed the invention of new motifs.

At the same time, in Budapest, Josef Halfer wrote and published in 1886 a book that would preserve in great detail the subtleties of a hard-won art. His work, first published in German under the title Die Fortschritte der Marmorierkunst (Progress in the Art of Marbling), became the bible of marble workers in the 20th century.